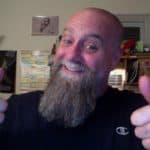 Stored pain and stress formed the core of my entire reality for over 30 years.

Dr. Marc’s been taking care of my spine for about 5 years now. I’ve always been very satisfied with the structural adjustments he provided. He’s literally kept me walking.

Between the job I had when we met and the life I’ve led in general, I have pretty much wrecked my back, along with many other parts of my body. I kept him busy.

Along the way, I took on even more trauma and the structural work was turning into a test of my ability to tolerate massive pain.

There was simply too much damage for the structural adjustments to be effective. They were becoming counterproductive, to say the least.

I was coming close to passing out from the pain they were causing.

Marc suggested we try NSA. I was all for it as I had studied the basics about it and I was convinced it could be helpful But I didn’t really know what to expect.

I hoped for the best and I learned a long time ago that I can trust Marc’s judgment. I wanted my active lifestyle back and I knew I had no better chance than through working with Marc.

Well, from the very first entrainment I experienced massive change for the better.

My breathing was greatly improved as stored pain and stress left my body from hidden niches I didn’t even know I had.

I felt incredibly relaxed within ten minutes of the first run. Relaxation of this type never happened with the structural work. Physical tension would evaporate and that was always a relief, but this was something altogether new and it felt great!

However, the most surprising part was the dismount from the table.

See, that is where I would normally endure yet another test of courage as the pain of that motion would rocket through my lower back.

Standing upright was always another tough chore to be done very slowly. And once I was up, I’d have to take 3-5 minutes before I even dared to take a step.The core support just wouldn’t be there if I rushed it.

This time, I swiveled onto the floor and stood up, all in one fluid motion, before I’d even realized I’d done it! There was some minor pain but that was it! And it has been like that ever since.

I still have pain but it’s about 5% of what I used to have.

To say my life has been one of pain toleration doesn’t quite do the situation justice. Now, my day to day pain is all but gone! Best of all, I can hike and lift weights freely again, as long as I’m careful, and that to me is the best gift Dr. Marc could have given me.

I do indeed have damage that can never be fixed but I’ve always felt that that pain could be lessened if the right technique was applied.

In my opinion, there is nothing to consider when trying to decide if NSA is right for you.

Just make it happen. The results are undeniably real. I am a happily stunned patient!

Ken Jensen
Author
“It Takes Guts To Be Me: How An Ex-Marine Beat Bipolar Disorder”
Practice Member

Thank You Google Reviewers!
5 Stars - Based on 38 User Reviews

Thank You In-Person Testimonials!
5 Stars - Based On 36 User Reviews

Thank You Facebook Friends!
5 Stars - Based on 8 User Reviews